the last post quickly mentioned a new perl script which is used to setup the catalog in 12c. first of all the script is officially document here. in summary it is used to execute sql scripts in one or more containers. it is even possible to execute scripts in parallel, e.g. if there are multiple containers to run the scripts against.

if you take a look at the script it seems there is not much in there. but if you are used to read perl scripts you’ll quickly notify that all the logic is packed into a perl module file called catcon.pm ( which is located in the same directory ). here is a simple flow diagram which rawly describes the path through the perl code: 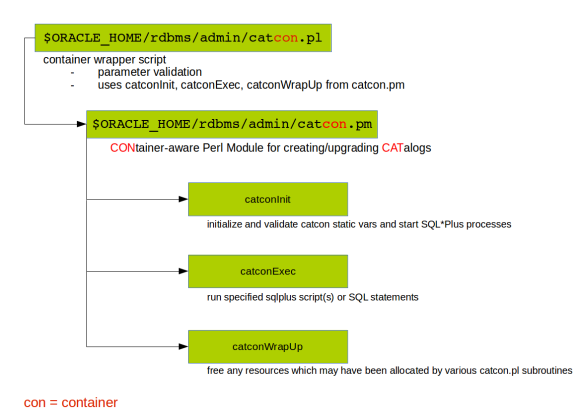 flow of the container scripts

so, when for for example this is executed:

… this actually executes the catalog.sql in all the containers databases as no “-c”-switch is given. this for sure is one reason why the setup of the catalog takes much more time than in 11g.

we can confirm this by looking where catconExec is called in catcon.pl:

the header of catconExec explains the parameters:

in short: run all the scripts referenced in the first parameter ( which is a perl array ), do not run it in order, do not run it only in the root container and do not issue per process initialization/completion.

at the end a little hardcoding in catconInit: “(default sys/knl_test7 AS SYSDBA)”. i wonder if this is a default password used at oracle development :) :

oracle 12c: looking behind the database configuration assistant ( with cdb )

as usual when oracle releases a new version of its database I start the dbca and generate the scripts to see what happens in the background. there are quite some interesting changes:

I am sure there are much more changes but these are the ones that catched my eyes while looking at the scripts. here is the complete sample setup ( you’ll need to be patient, this will take much more time than you are used to in 11g ):

otherwise your installation will fail with:

these are used to further improve seperation of duties: documentation

life could be so easy …

those little differences in flavors of unix

recently we had support oracle on hpux. not a big deal in regards to the database. but when it comes to the os commands and files and you come from another flavor of unix you probably loose a lot of time searching for the right commands and configurations.

here is a nice comparison which makes life a little easier: unixguide

to be honest, I never was aware of this. there is a create schema command in oracle which can be used to populate a schema in a singe transaction:

this can be very handy if you want a script ( which creates some tables and views ) to be atomic. if there is an error in your create schema script like:

… nothing will be created at all. you may fix the script and start over again ( without dropping anything as you would need to do it if you use single create commands ).

this is documented here.

the history of programming languages

here is a nice overview of the history of programming languages ( source: visual.ly ):

The History of Programming Languages infographic